Before I started this chandelier project I did research on the best way to wire it. By research I mean watching YouTube videos. And talking to two helpful worker bees, one at Home Depot and one at Lowe's. So here is my disclaimer. I am not an electrician, electricity scares me. It scares my husband too because any  time we do anything with electricity (hang a light fixture, switch out a light switch, etc.) he makes me turn off the electricity to the whole house. If you have any questions or concerns about how to wire your project, ask a professional, do not ask me. I am not an electrical specialist, I only play one on my blog. :-)

I bought 2 packages of 12-foot lamp cord (with a plug attached), 6 2-inch sockets, steel nipples (no jokes here), and hex nuts. The plug attached lamp cord was the only clear/silver-ish cord I could find and it actually worked well because I used one of the plugs to test the chandelier after it was wired. 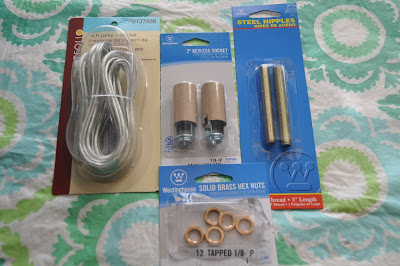 The steel nipples had to be cut down in half so they would not be too long for the chandelier, and it was easy to do with a jig saw with a blade designed for metal. 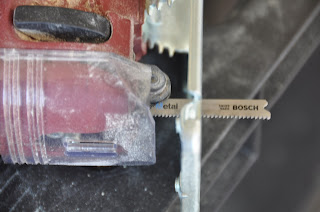 I loaded the nipple (just doesn't get easier everytime I type the word) into a clamp to hold it while I cut it. I wrapped it in paper towels so the clamp wouldn't squish the threading. One long nipple was easily turned into two shorter ones. 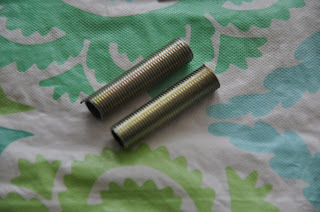 The lamp sockets have threading on the bottom of them that the steel nipple goes through (they are shown upside-down in the photo below). You then feed the wire through the nipple, into the socket. The sockets have a cardboard sleeve, and underneath two screws on them...a gold and a silver. The gold is for the hot wire and the silver is for the neutral wire. With the lamp wire I bought, the neutral half of the wire had a ridge on it to identify it, and the hot wire had writing on it. 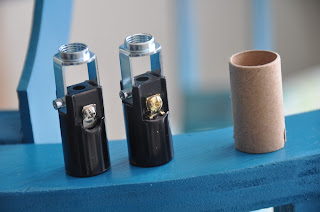 I attached the socket to the lamp by putting the steel nipple through the hole in the chandelier, screwing the socket onto the threads on top, and tightening the nipple on the bottom with the hex nut. 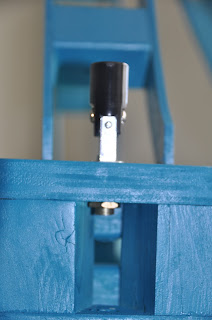 I cut my wire into 6 sections, each long enough to attach to the socket, go through the arm up to the top of the chandelier, and have a little extra for connections. I left the 7th piece extra long (this will be the piece that goes into the ceiling) and for now left the plug attached to it. I pulled the lamp wire apart, stripped the plastic off about 3/4 of an inch at the ends, fed it through the steel nipple and up to the socket. The neutral wire (again, ribbed) went to the silver screw wrapped around the top of the screw like a hook, clockwise. Then I tightened the screw. I repeated this step for the other side of the socket, attaching the hot wire to the gold screw the same way and tightening the screw. I then replaced the cardboard sleeve. 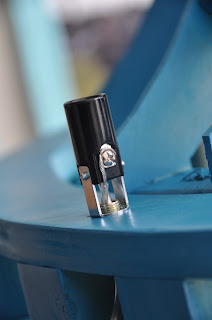 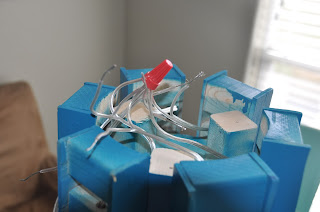 I repeated this step with the hot wires, so all of the wires (hot and neutral) were connected and contained in the plastic wire connectors. 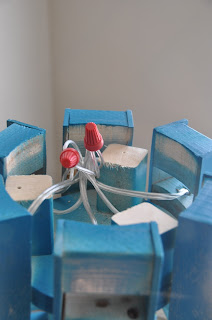 I then taped up the connections really good with black electrical tape to make sure no wires were exposed and that no wires would fall out of the wire connectors. 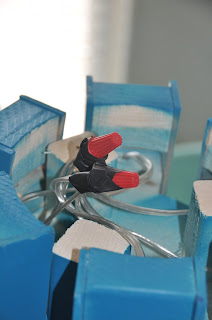 I used the plug still attached to the 7th wire and plugged it into an electrical outlet to check to see if it worked, and it did! All of my hot and neutral wires were connected properly. No smoke, no fire. :-) 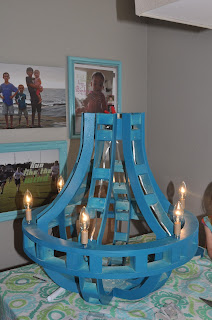 I  cut the plug off of the 7th wire. Before I attached the top back on the chandelier I drilled a 1/4 inch hole through it and pulled the wire through. Now the chandelier was ready to hang in the ceiling! Well after it was covered in fabric, but I'll save that story for another day. Wiring the chandelier was really not complicated, much easier than I expected. I just had to make sure and hang it before the sun went down...because you know the power's all going off for this baby.