I woke up yesterday morning with a whole plan of how my day was going to go, and what I was going to get done. I was planning to finish this half-bathroom, where I am working on baseboards, planking, and finishing touches on the vanity: 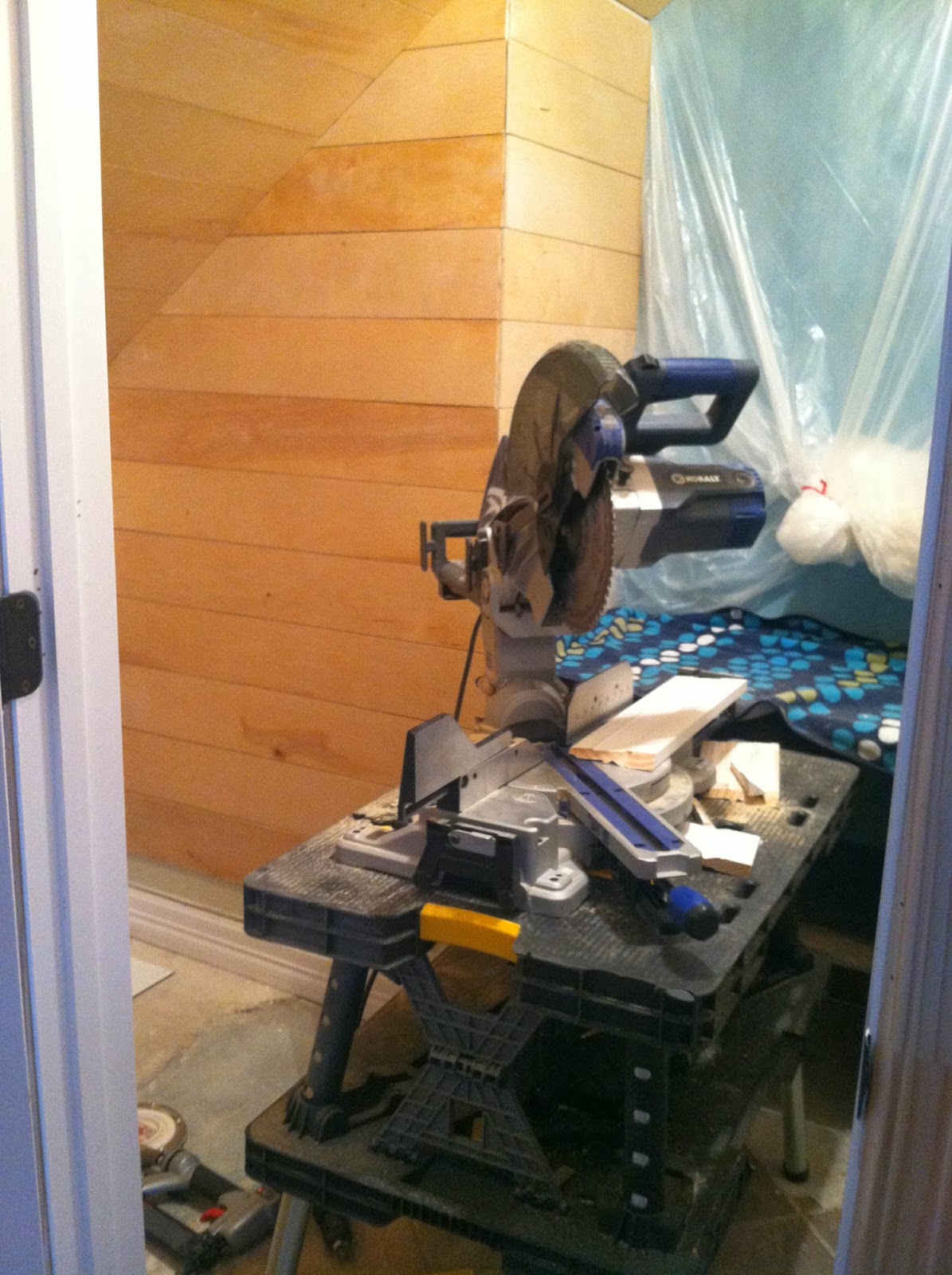 Let's just say it didn't go the way I had planned. But when you are a DIY GC, you gotta learn to roll with it...and quickly!
Since I have been doing a lot of work like building 2 bathroom vanities and cutting molding outside, I closely monitor the weather every night to see if I have to break down everything I'm doing and bring it inside the crazy crowded garage. Although the forecast was clear skies, I quickly realized the wet morning fog was not going to help my day. I got my husband out of bed so I could drag my half-finished wet bathroom vanity into the house to dry it out. It ended up in my boys' bedroom. And yes, that is kitchen junk on shelves in their bedroom right now. We are living in a crazy construction zone! 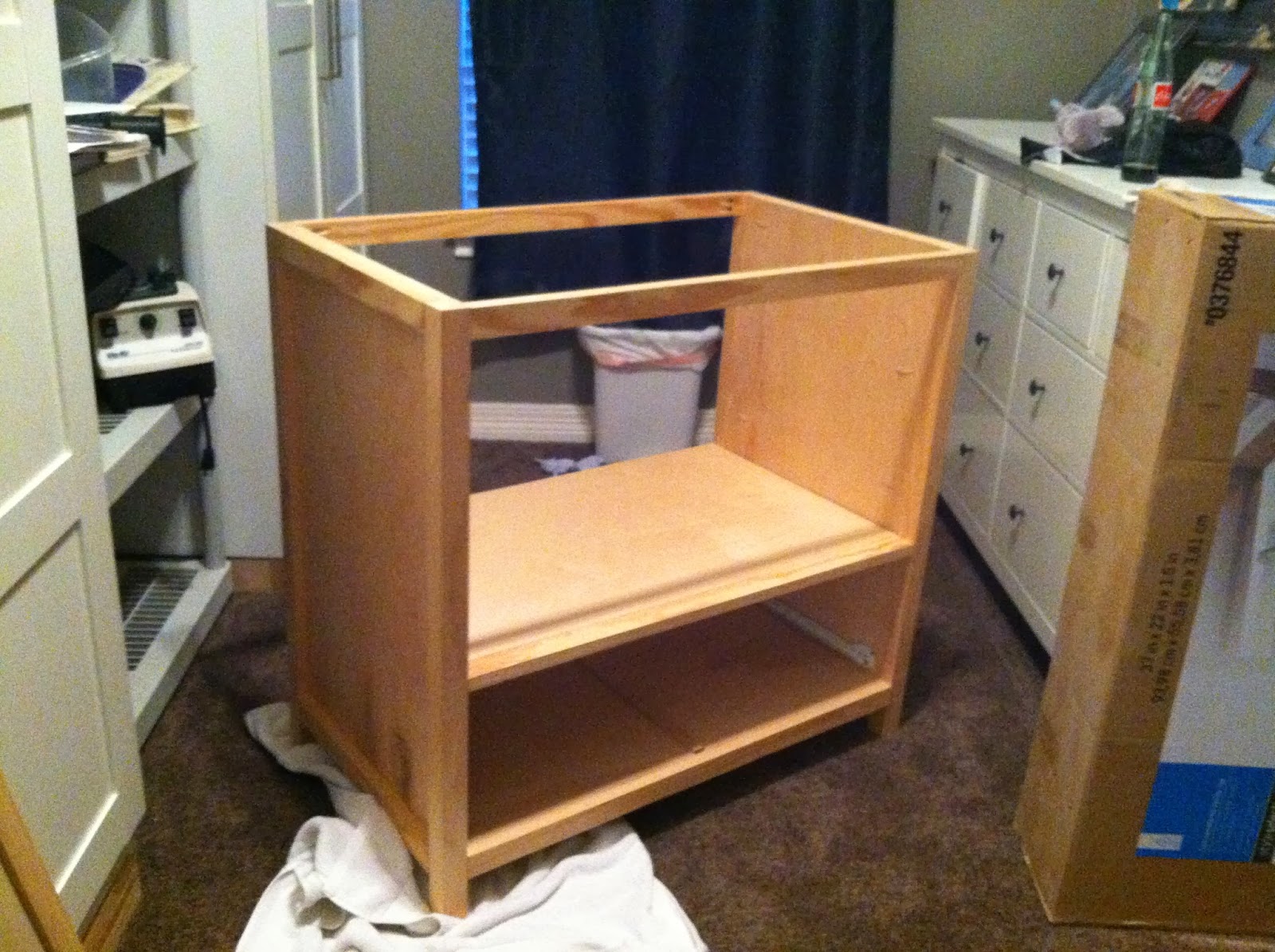 Soon after I got a call from the tile guy who was supposed to come in a few days but got a break in his schedule. I told him to come, but had to hurry and fix a pony wall situation in the full bathroom we are adding. Yes, I just said "pony wall situation". 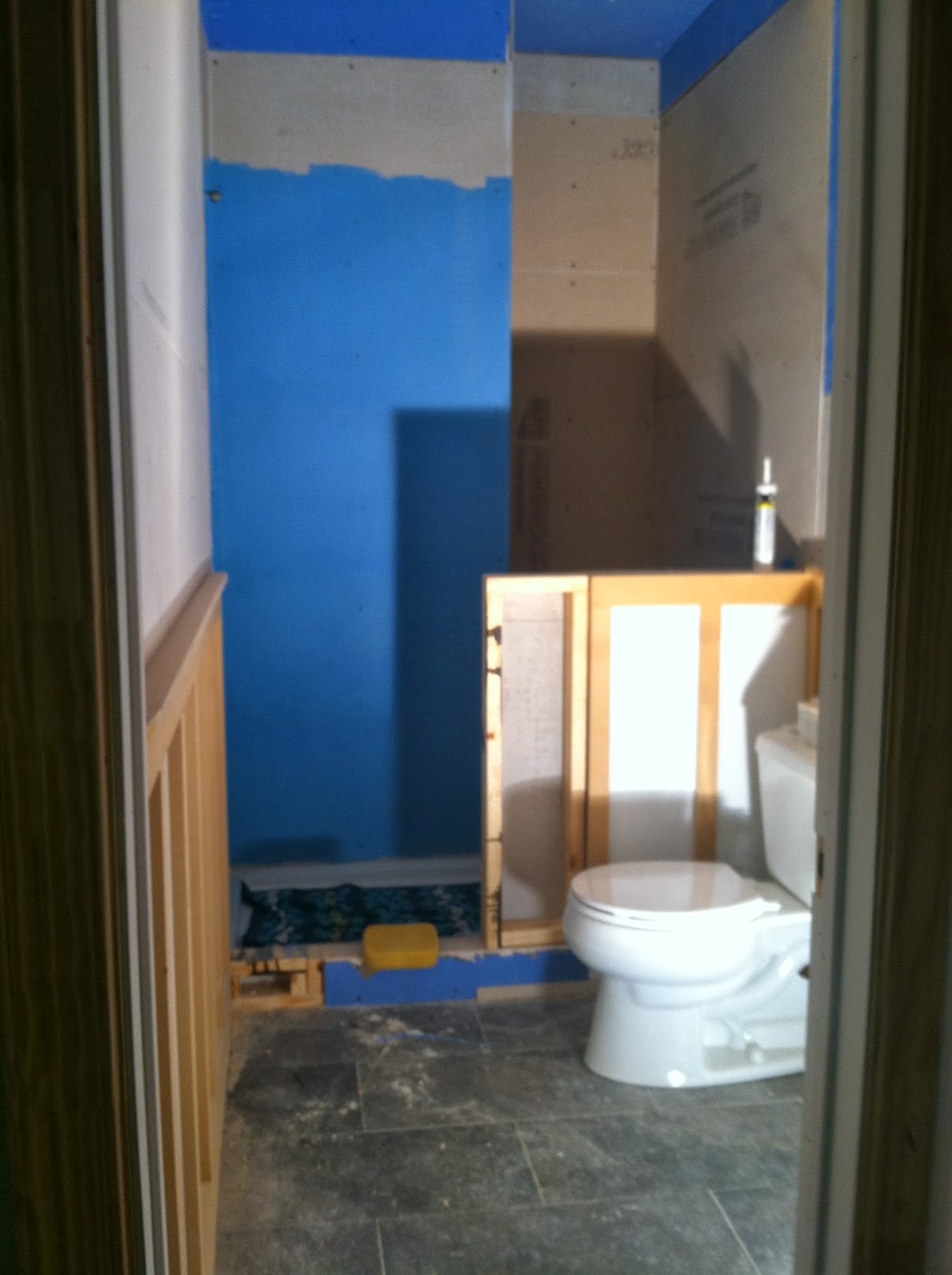 Last week I had two pony walls for the shower, one on the left (10 inches) and one on the right (24 inches) and then the glass door would go between. Well, the plumbers were here and I had them seat the toilet, and DOH! the toilet went past the pony wall. Which meant the glass door would open into the toilet. So, I had to take out the small pony wall on the left and build the pony wall on the right bigger 10 inches. You can see the extra piece I built in the picture. Super fast, of course, because the tiler was on his way!
As I was finishing the pony wall and the tiler was unloading his equipment, a dump truck showed up with gravel for the concrete for the new addition. It was a really big dump truck and I had no idea he was coming. My husband's car was sitting at the end of the long driveway, and was locked with a key in it, and I couldn't find the other key, and he wasn't home. So this is what a ginormous dump truck looks like when it comes within 4 inches of a car you can't move: 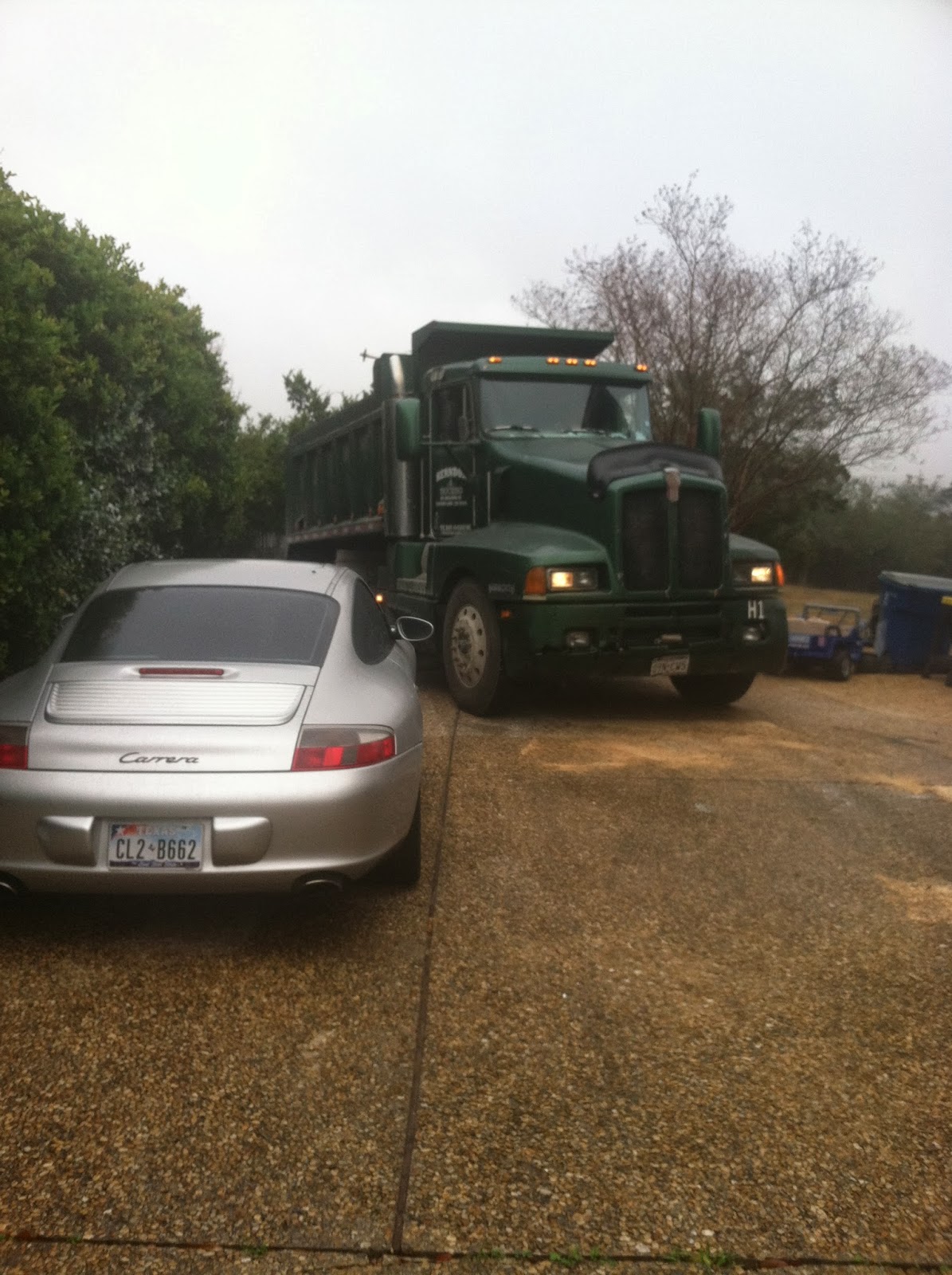 Yikes! Luckily I eventually found the key and moved it, because he dumped four more loads and it was super scary.
After the tiler showed up and got started I got a call from the counter company that my pieces of cultured marble were ready for the bathroom. I am putting 5 1/2" strips of cultured marble (solid white) on the edges of the pony wall, shower threshold, and walls to the ceiling for the glass to sit on. Also there is a seat in the shower so the seat will be out of cultured marble too. I got in my car and drove a half hour to the place to find out they were all wrong, wrong, wrong.
Here is an education if you don't know how cultured marble is made (because I didn't!!). I thought they made it into slabs and cut crisp pieces out of it for back splashes and other straight pieces, like the strips I wanted. But, noooooooooo. They pour every single piece of it into a mold. So the edges come out bumpy and curved and crappy, unless you specifically ask them to polish them up, and you have to order extra length so you can cut the curvy crappy edges off to form a straight edge. So I went to pick up a bunch of pieces, and only ended up with one: 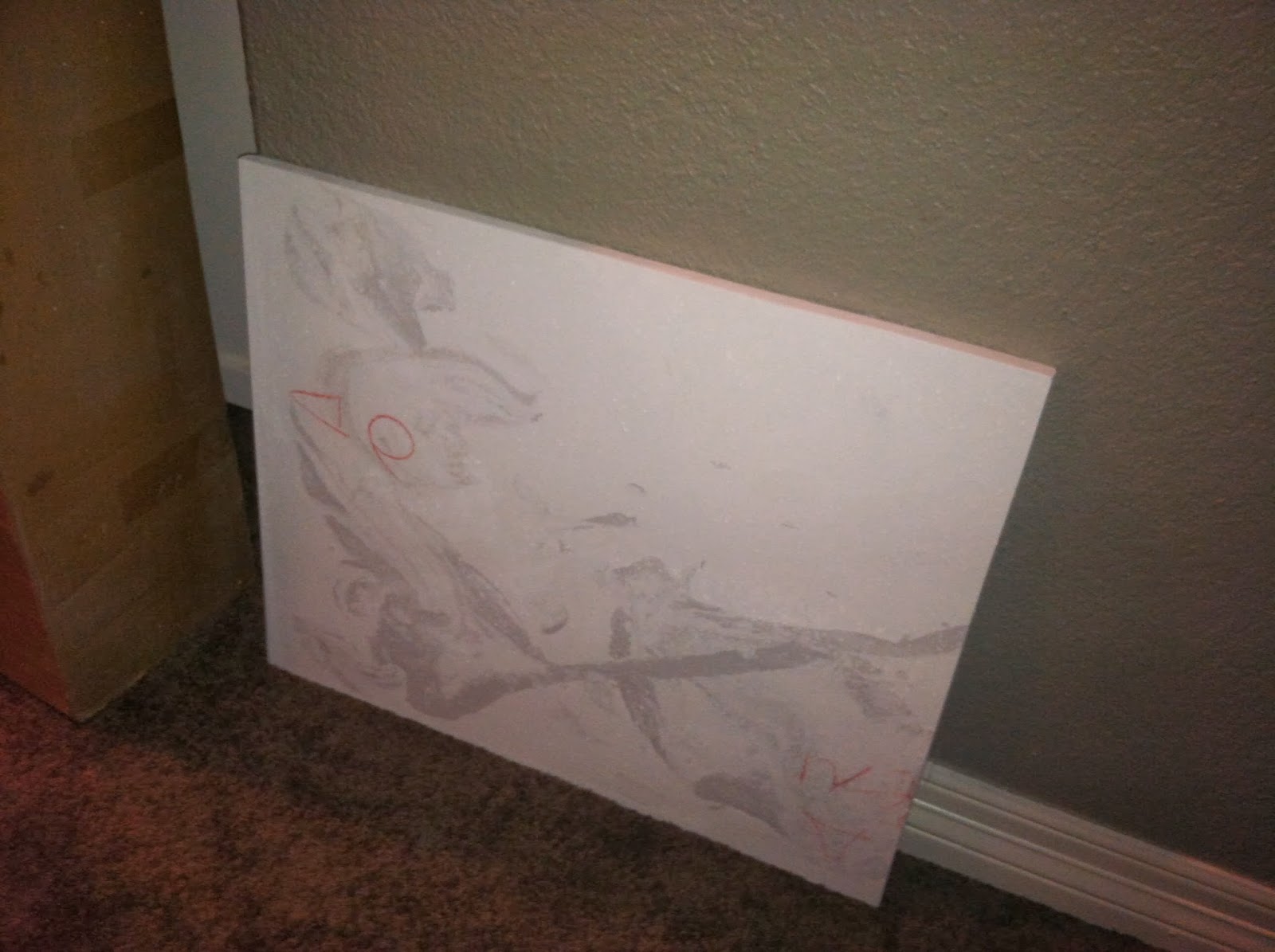 The shower seat, which now also lives in my boys bedroom.
On the way home from the unfortunate cultured marble education session, I got a call that the kitchen cabinets were being delivered. 3 hours earlier than they told me and about 2 weeks earlier than I originally expected. So I came home and scrambled to clean out my living room for them. And then the delivery guy showed up. 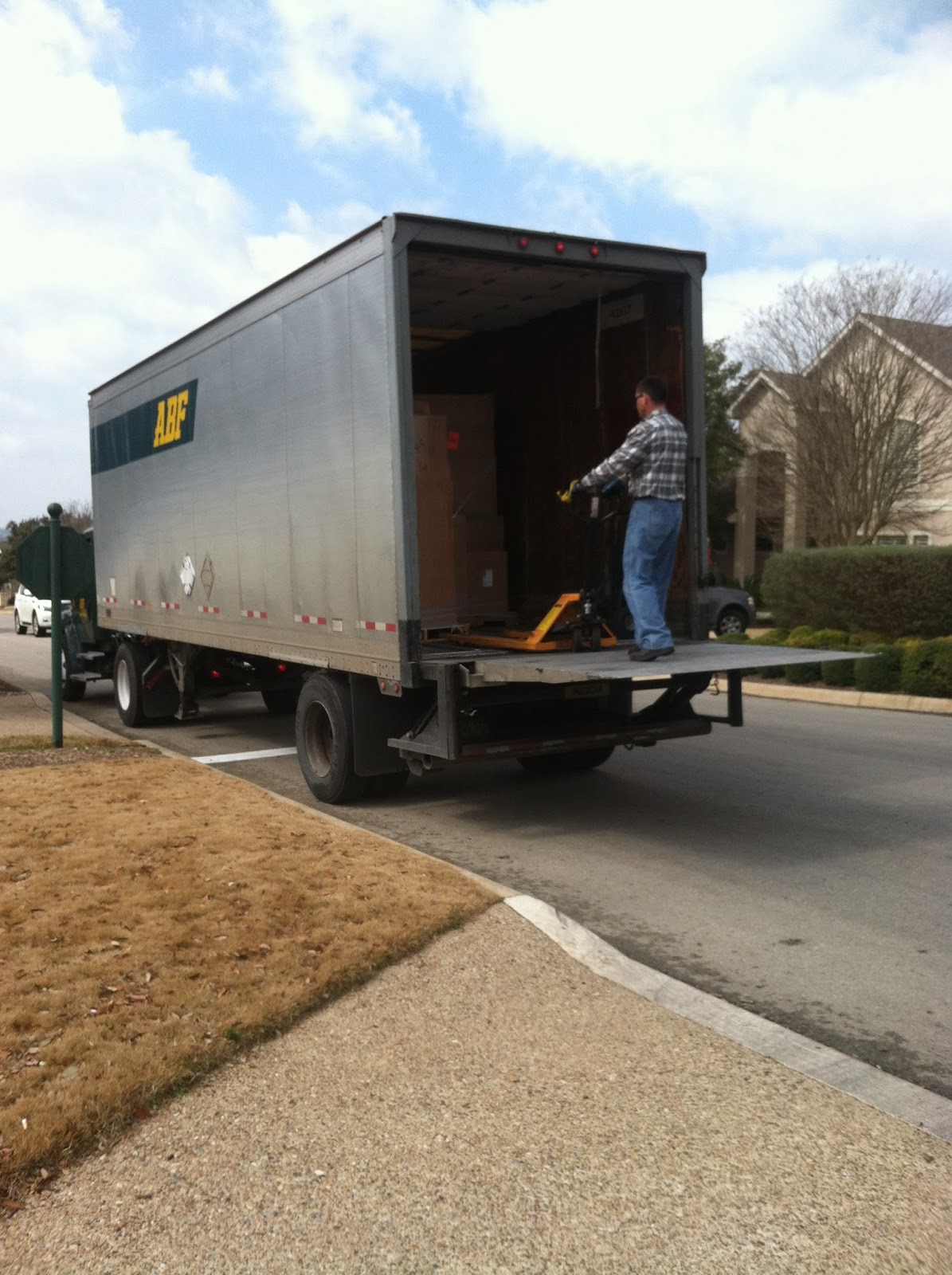 And normally, I love deliveries, but this was crazy. Because on his tail was another load from the dump truck, and another truck/trailer with a Bobcat delivery. All at the same time. 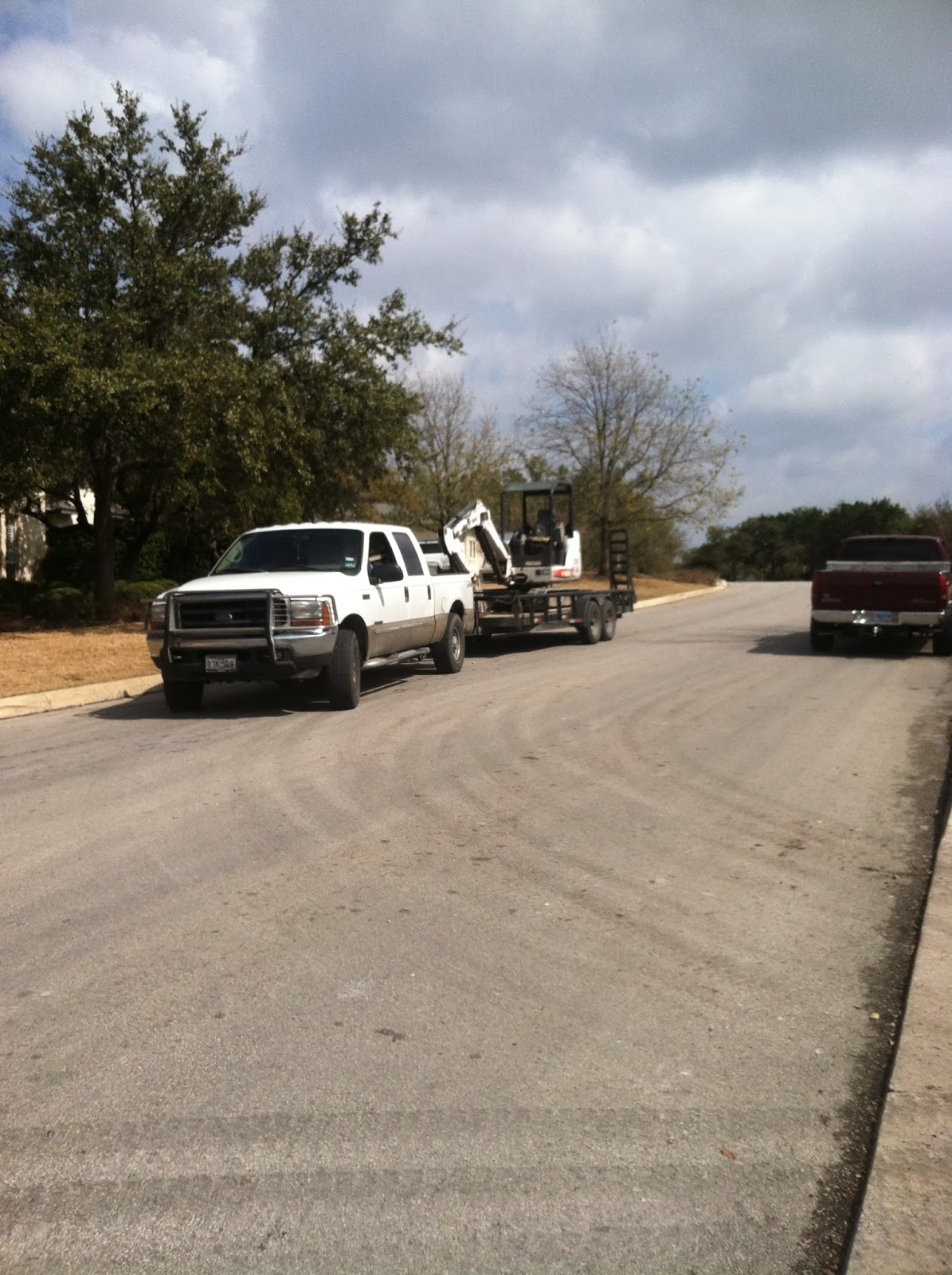 The cabinet guy put all of the boxes on the driveway, because lets be honest, there was no where else to put them. 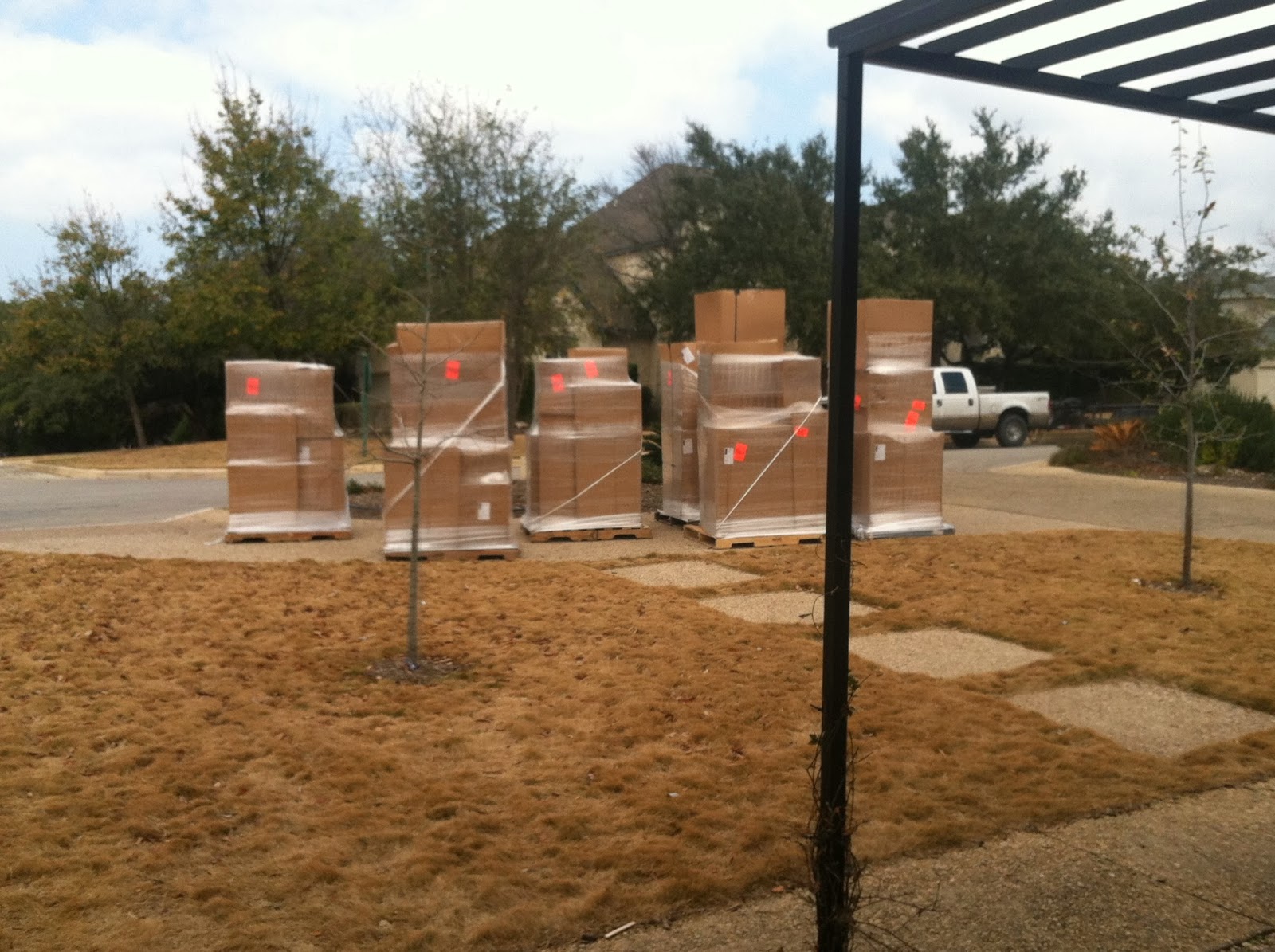 This is what my garage looks like right now, crazy town. And I haven't had a spare 2 hours to get it organized. Again. 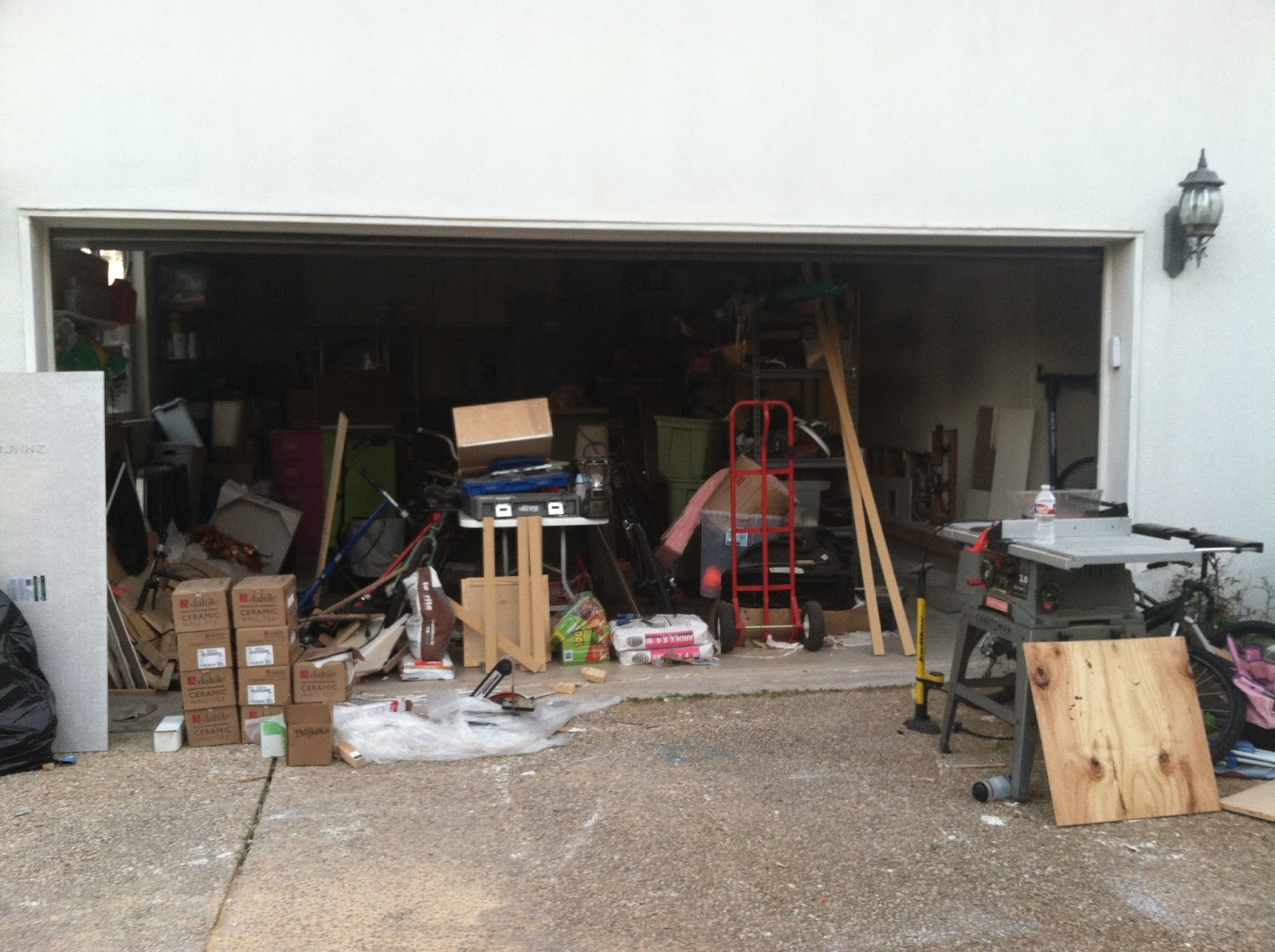 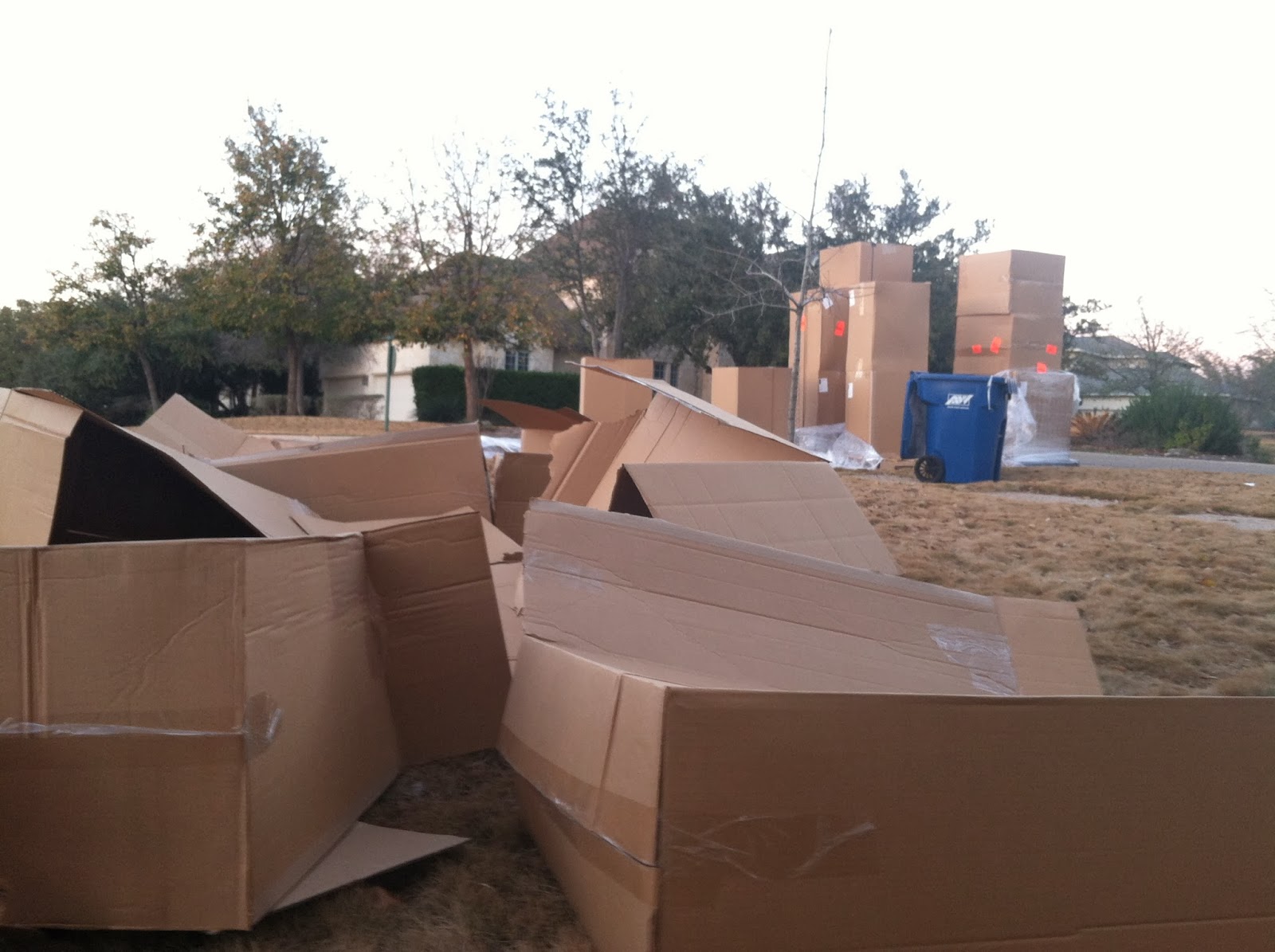 And started to pile cabinets into the living room, checking each one for damage. 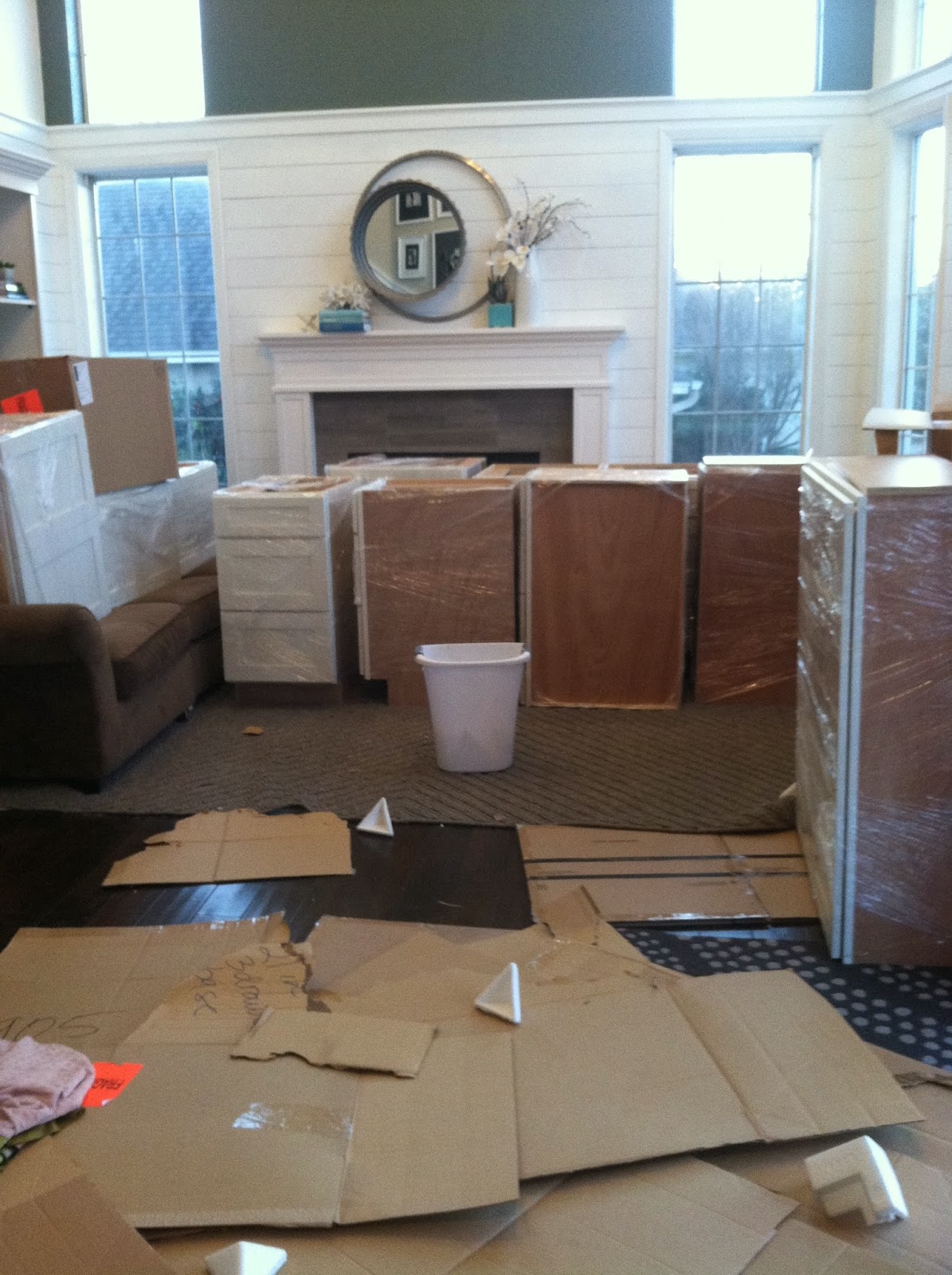 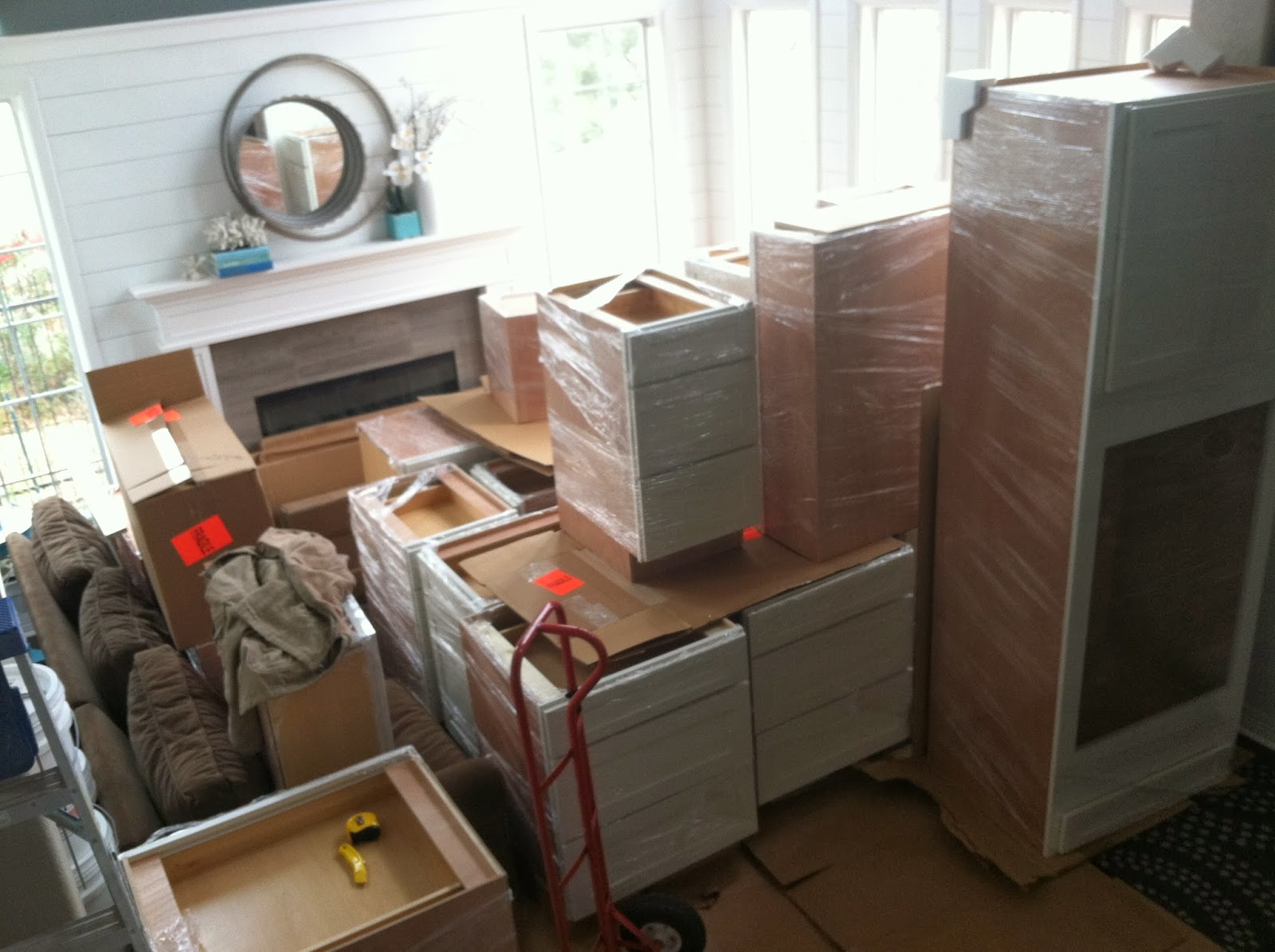 Yeah, no one will be going into that room anytime soon.
I have decided being a General Contractor is a very hard job, and my hat goes off to those that do it and do it well. If you decide to do it yourself, get ready to roll with the punches...or you will get knocked out! I'm luckily still standing after yesterday. I'm going to go work on that bathroom now, unless my phone starts ringing again or someone unexpected shows up. Ahhh, the joys of remodeling!