I love when I see "the big reveal" on a blog, when a room is completely re-done with glorious before and after photos that document the unbelievable transformation. I like to oooh and aaah over all of the beautiful details in the photos. I think, "what would it be like to have one room 100% done and ready to go?". Because realistically, I don't think my rooms are ever 100% done. I am really fantastic at 90% to 95% done. That is where I really excel. That last 5% to 10%--not so much. I have been working in a lot of different rooms in my house, and on lots of projects, but I always wonder if it is really big-reveal-ready-to-go-on-the-blog. Since chances are pretty good that it isn't, I've decided to let go of the big reveal and settle for.......wait for it.......the Almost Done Reveal! And since I'm sure it will be a huge hit in the blogosphere, I will go ahead and call it "DecorSanity's Almost Done RevealTM!". OK maybe not.
When we bought the house, there was a room to the left of the entry way that was used as a dining room. We don't do very much (well...none) formal dining so we decided to turn it into a study. It had a really bad bronze faux painting job and the same tile that plagued my entire downstairs. It was also missing a light fixture since the house was a foreclosure and stripped bare of lights, appliances, plumbing fixtures, even the front automatic wrought iron gate on the driveway. Classy. Here is the before picture.....get ready for it..... 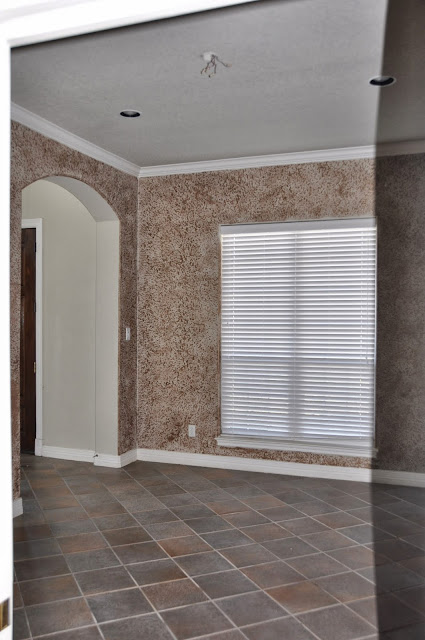 Boom. Revel in it's gross-plainness.  Well, I guess the boom happened after we started removing all. the. (flipping) tile. 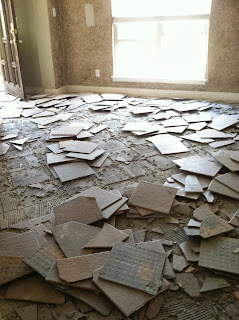 The floors were replaced with hardwood and the walls and ceiling were painted Benjamin Moore Revere Pewter. And then we just kinda threw a couple desks and couch in it. And it functioned, but I didn't want to hang out in it--ever. Not enough storage, not cute enough, you get the drill. So we've turned this former dining room into a study I really enjoy working in! The light fixture is a chandelier in an upside-down basket, which I explained how I made here. 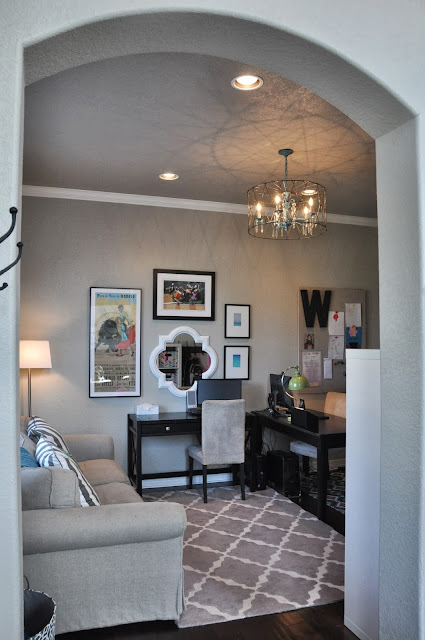 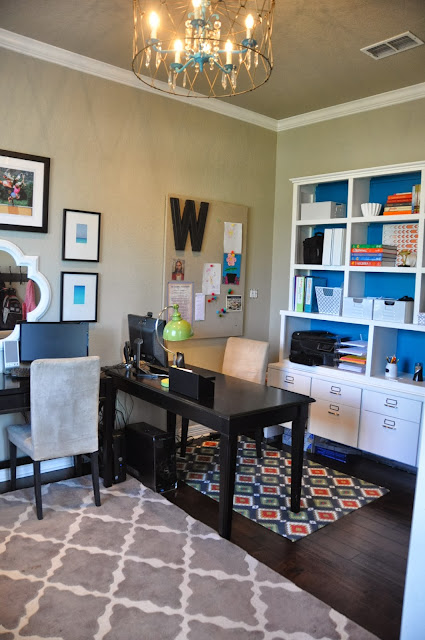 The console with the hutch is something I put together/built, and I'll post about that project next. 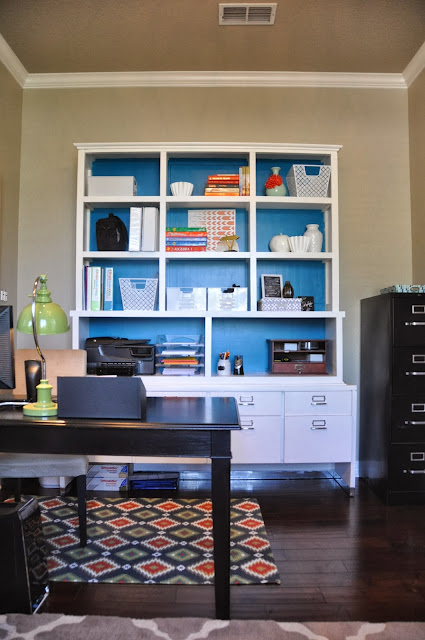 It holds so much storage, all of my office supplies, binders, camera equipment, cables, printer and much more fit into the drawers and shelves. And there is lots of room for the sentimental, pretty, and practical on the shelves. You see that ship-shaped trophy? Let's just say someone in my house was the Carnival Magic's Kids Club Parents' Dance-Off Champion. OK, it was ME!! All of the pictures on the wall have some sentimental value. These four prints are of Chicago, where we lived in while my husband was in school. 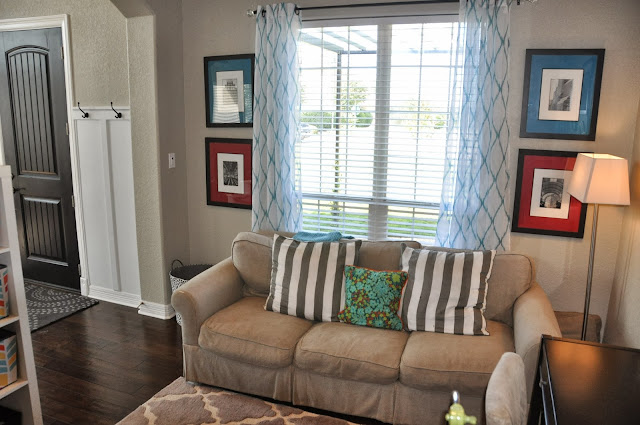 I've had these four pictures for awhile and wasn't ready to part with them, but they were double-matted with white mats, the outer mat having a black rim on the inside. I decided to brighten them up a bit by painting the outer mat with regular paint. The blue is the same color as the back of the console, and is quite a bit more turquoise than these (dang) pictures. The others are a true red. 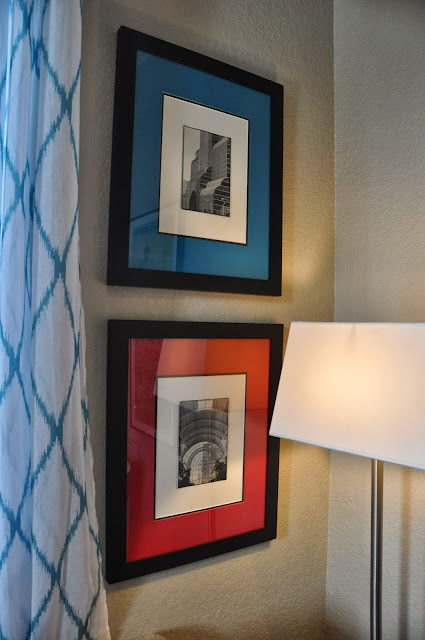 The picture of the matador was my inspiration for the color scheme. My husband lived in Spain for two years and we went there for our 5th anniversary. We went to the Plaza de Toros de Madrid (Madrid's bullfighting arena) while we were there, and I found this vintage poster years later at an antique shop. I gave this photograph "The Bones Brigade" signed by the photographer to my husband for Father's day. It's a really good shot that I think represents what 80's skating looked like....bright neon clothes and hand plants. And for a kid that grew up in San Diego watching these guys at the local skate parks, they were heroes. 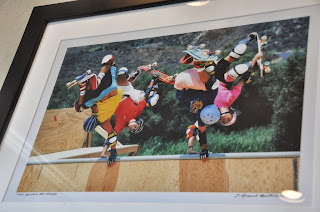 And for very practical reasons I included a shoe and sock station in this room, because the kids are always looking for their shoes and socks as they head out the front door. The hooks are for jackets and backpacks. 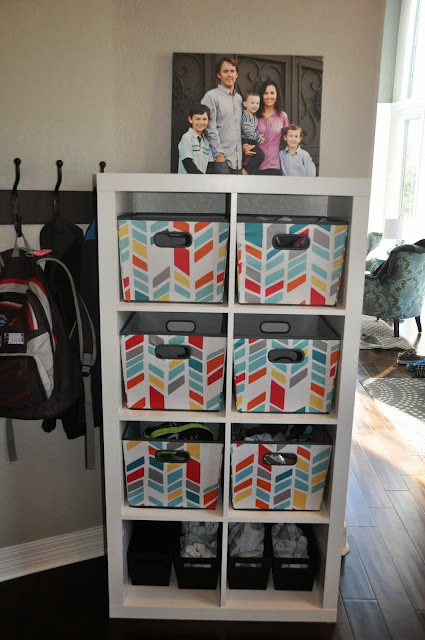 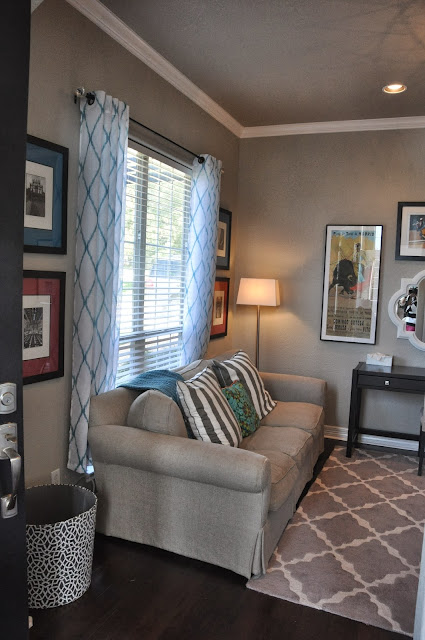 And now for the list of the 5% to 10% that's not done--board and batten on the walls, recovering or replacing the sofa with something more colorful, built-in lockers for the shoes, jackets and backpacks. And I'm sure other things I haven't thought of yet. But for now, I'm really enjoying the space, and love spending time in it--and thinking about when to get started on the rest of it!